At first I weighed all the girls that came to the party. This time I took turns putting one on top of me, then two, then three, and finally four at once. Unlike the previous film, I chose four of the heaviest girls from the group of twenty. Will the weight exceed a quarter of a ton? You'll have to watch the film to find out. Time: 22.52 min.

We decided to make a competition and see who can take having a girl stand on our throat the longest. Two girls stand on our stomachs and they hold another one who is supposed to stand on our necks. I didn't expect that my competitor would start to lose consciousness. The girls were also terrified, but he didn't really know what was going on. If that happens, its important to have your eyes open and everything will be ok.

The second party in these series. Unfortunately, the first part isn't of good quality. Three girls, one of them was the first time on this type of party. But she identified with a situation very quickly. Unfortunately, 4 pictures isn' enough to express the whole essence of this party. There is also depiction F/F Time: 9.49 min. 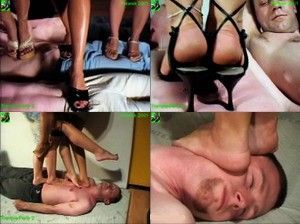 Posted on: 2014/08/10
Keywords: Trampling, Trampling Clips, TRAMPLING - Peterek2001, Year - The second party in t, the first part isnt of good q, one of them was the first tim, pictures isn enough to expres

Sweet Mistress Serena takes off her ankle boots and dominates and tramples her victim now under her bare feet. She squishes his face under her both soles and walks over him without mercy.

A barstool sits on a guy's stomach. The girls decided they wanted to take a picture with this model. Each of the five girls sits on the stool while the other girls take their picture with their smartphones. They wanted to have a memento so we made this film. Time: 5,32 min.

The film starts off with some shoe adoration. The slave takes them off gently. Next the dominatrix puts on some high-heeled boots and makes him lick them.She is a tall woman and weighs over 70 kilos.Next the hard trampling starts which includes sticking the heels into his body, standing on his head, and sticking the heels into his mouth.Then she puts on classic high-heels with ankle straps and performs these acts once again.The most hardcore thing in the film, though, is the hand trampling. She steps hard on his fingers, and at the end she stands on both shoes and leans back, putting her whole weight on the heels. She kicks him several times before she leaves.

I kick the loser's face hard today. Dominant slaps in the face with my bare feet. I trample him and stand on him. I like to put my bare, fragrant foot directly on his face. He should feel my weight, enjoy the slaps with his feet. He can thank me by licking the soles of my feet afterwards.

Trapped with his head in the box, Mistress Anfisa can finally do to this slave everything she has had planned for a long time. She stands in her high heels and then climbs mercilessly onto his chest. The pointed heels stab deep into his belly until his face is twisted in pain. This gives her unbelievable joy because this is exactly the reaction Mistress Anfisa was looking for. A helpless slave in intense pain under her feet! Only this will really satisfy her. So she goes on tormenting him with her dangerous high heels. To make life even harder for him she makes him stick out his tongue. No matter how harsh his pain is the pure hell continues!

A man lies on the floor wrapped in tin foil. Miss Julia and Miss Alexandra begin to trample him barefoot. They are both dressed in black, wearing black skirts and stockings. The girls walk on him. Then they put on black boots on thin high-heels and continue to step on him. When the camera is placed behind his head, you can hear his heavy breathing. This friend of ours never gets marks on his body, no matter how hard the girls step on him and even if they are wearing high-heels. At the end, the foil is ripped apart by the girls? heels and they trample over his naked body. Time: 10.50 min. REMASTERED - movie from 2005

This film was recorded during renovation work on an apartment. The hallway that people walk through is specially narrowed so that people walking past will be as close to the door as possible. The door is open and covered with foil. There is a carton in front of the door and my friend and I put our hands under it. As you can see in the pictures,there are four places where there are bulges and that's where our hands are. You can also see how we look under the hanging foil. Unfortunately, the women avoided these spots, although there were a few who stepped on them.

Lady Elsi Spring takes off her boots and tramples and squishes you under her smelly socks .. you can look up and you will see she loves what she is doing.

First one of the girls explains the rules of trampling to the rest. Nine girls have to stand on a man lying on the ground for 8 minutes and none of them can touch the floor. During the first try, the girls climb on me in high-heels, but their heels dig into my legs so hard that I can't take it and so they quickly get off. Then we try again, but without shoes and its a lot better this time around, although the girls don't move that much; they just stand on my stomach and chest making it impossible for me to breathe. A few of them stood on their toes which caused additional pressure. Time: 13.50 min.

The camera is placed at the level of your field of vision so you can feel like you're lying on the ground and imagine that the girl is walking all over you. She weighs a little under 50 kg. and has small, size 35 feet. Winter shoes on wedges with treads leaving visible marks on your body. Finally, when you are all red, she will jump all over you and the sound will be like grinding beef.

3 girls in high-heels walk on a guy who is lying on the floor. They switch places often, but without stepping down from him. Then they put a board on his body and stand on the board. They have a combined weight of 170 kg. Time: 7.22 min. REMASTERED - movie from 2006.

Sneakers and sweatpants. The film starts from back trampling. A girl jumps on a man's back. Then he lies on his back. The girl actually stands on his nose, with one leg on his neck, and at the end she starts jumping on his stomach, bouncing very high and landing with a big thud. Time 7.21 min. REMASTERED - movie from 2005

3 girls climb on top of a board under which a man is lying. Upon the photographer?s request, the girls start jumping on the board. They repeat this 4 times. Next, each of them stands next to his face and they tell him to kiss and lick their shoes and feet. One of them stands on his head. At the end, one girl is left. She sits on the board and makes him kiss her feet. Time 15.44 min. REMASTERED - movie from 2005

This is the first time our new friend gets trampled over. The mistress asks him questions as he is lying under her heels and she expects obedient answers. Then she makes him lick the soles and heels of her shoes. She treated him very gently since she was wearing a new pair of shoes with very sharp heels. Time: 7.21 min. Remastered - movie from 2005

Miss Lilly Malbert removes her sneakers and socks and stars trampling the poor guy under her bare soles. Her feet kick and slap his face over and over. She jumps on him and tramples his face without mercy ....

A pair of red high-heels and a pair of polka dot ones. The red heels are missing one heel tip, and a nail is sticking out. During the trampling session, you can see that the tip is coming off the left shoe as well. Either the heels were very sharp, or our "model" wasn't very resilient today:) He decides to lie on his belly so that the girls will walk over his back. It didn't help much.