This video starts out with Savannah weighing in. She first tries an old plastic dial scale. As the dial spins around twice, it's amazing the cheap plastic withstood the test. She than moves onto the bariatric scale to reveal her true weight. She was much heavier than she originally told me... in the tune of 50+ lbs difference.From there, it's a game of testing Matt's limits and Savannah figuring out how to trample. There's some awesome POV footage from Matt's angle down on the floor. It really gives you, the viewer, the scary perspective of what it's like just moments before a 500+ lb supersized beautiful woman plants her feet full weight on top of you.At the end, Savannah can tell Matt's energy is dwindling down, but she wants to draw the last bit out of him so she commands him to move away from the counter so she can plop her big beautiful ass down onto his chest.

It's Sunday and little fetish biatch Bambina has entered in the room of a new student girl Teodora. She studies for the test, but our female hero doesn't give her a brake and she is in love with her. And we are too. She is young, pretty and with beautiful feet and butt. Bambina tolds Teodora about her trampling fetish. Taller and heavier Teodora wants to give her a chance and she have fun with her.

70068 - Annabell's back for another trampling session

Annabell just can't get enough of torturing this trampling slave and this time she grabbed a pair of ankle boots to torture him with. The hard platforms and the sharp heels dig deep into his chest and stomach, but Annabell doesn't care a little - she just continues and enjoys seeing him suffer - she even steps on his groin, heel first of course, a few times before she sits down on him and takes her boots off. Now with the boots off she tramples him again and now she can perfectly jump all over his chest and keep his head down using her sweat-soaked nylons!

Every happiness has the end. Bonny and Maddy has fun in the fetish world and we say goodbye to Maddy. She leaves the site. Throat under attack. The girls stand on his throat full weight.

Multi trampling video with 2 men and 2 slaves and mistresses Charlotte Arina.They wear pantyhose and stockings nude black pumps with heels and they piÃ©tinnent the two male slaves. They remove their shoes and ride on a video on the head of a slave .... SEEN !!!! 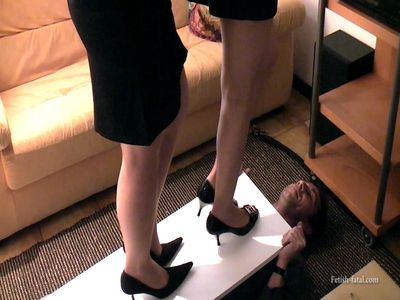 Rachel's Phone Conversation With CharlotteCharlotte stands on Mark's head & Rachel stands on his back Rachel gets a phone call & forgets she is stepping on her victim, Charlotte is engrossed with Rachel's phone call she also forgets she is on him all the time their victim is in pain trampled & crushed by both girls.

Joss comes with her girlfriend Brook to make a new slavery. Brook is a new girl, born for male humiliation, with some experience in fetish kingdom. They will make the great videos together. Trampling for high heel lovers.

The slave already believed that his mistresses would have some mercy when they wear no shoes for a trampling session - only their stinky old socks. But that was a mistake! It's just easier to trample a face without shoes! The sisters trample the slaves face without a sign of mercy. Sometimes they take turns standing on it, sometimes they even stand on it together! In the end they take their socks off and trample his face under their bare feet too. His face must be destroyed!

Sarah is a right little dominator, she jumps from the couch on to Mark's hands for 1 minute smashing his hands & fingers under her cute dolly shoes, she then sits on his head all that jumping has made her tired & she uses his head as a seat & watches tv.

Which part of âJerking forbiddenâ my slave didnât understood? I have cought him right in his jerking action. But well, he that will not hear must feel. Better: suffer! Well, little bitch, how does it feel, when my heels dig in your monkey praws? Do you get a message in your dump head? I hope it for your, because: Another thing like that â and you had a thing.

A slave get beaten and trampled under three cruel girls in high heeled shoes, she trample him hardly, stomp him, stomp his balls, kick him, stand on his face, jump on him without any pity. A very good trample clip.

Another guest model and a new great surprise for all of us. Joss has bring her girlfriend who is really curious what we do on the site. Her name is also Jenny like our latest guest model. This one is smaller, cute face and very pretty body. The victeem of them is our professor who is mad about her, no doubt :) Face standing made by two beauties.

We ordered this old guy and this tiny asian guy to lay down on the floor so we could use them as a catwalk. We walk over their bodies without any mercy. We jump on them and cant stop laughing about these losers. We even destroy the old guys' balls by jumping on them.

For this brutal boot trampling I'm binding the slave's hands and put a gag in his mouth - this way he's not only unable to protect himself, but also neither able to beg for mercy nor able to scream for help! He's totally at my mercy and I'm not going to go easy on him. I start to trample him wearing my sexy boots with chunky heels and walk, stomp and jump all over his body. You can hear him moaning in pain through the gag - but I'm not going to stop just yet. After taking off the boots the torture continues as I trample him with my bare feet. Now I'm also trampling his head and throat, stomp some more and inflict extreme pain on his body by standing on my tip-toes only!

Mistress Maeva trample her slave under her new ballet shoes Repeto. She stomp him hardly, jump on him, stand on his face, stomp his balls, she walk on him like a vulgar doormat.

Annett's dressed to kill, wearing a sexy black dress and hot black/red peep-toes with high heels, when she approaches the trampling slave. She laughs as she walks over the slave's chest carelessly as she knows that's just the soft start of this session. She steps below his belt a few times and grinds his cheeks under the hard sole of her sexy shoes before she taken them off, while standing on him. She puts her shoes on his nose one after another and steps on it with her bare feet so the slave has no chance but to smell the inside of her high heels. Now that she's on her bare feet she jumps on his body, stomps on his chest and steps on his face and head with her full weight. A really cruel mistress in the body of a cute blonde girl.

My friend and I were walking through the woods without shoes - as we wanted to get our feet extra dirty today! We ordered the slave to wait for us at a fallen-over tree and sit down on the tree when we arrive. We show him our dirty soles before we start trampling him. As we stand on his body and trample him we also make him lick our dirty soles. He has to lick all the dirt from our sexy bare feet and endure the pain of us both trampling him brutally at the same time. We even stuff both our big toes into his mouth and make him suck all the dirt off!