72579 - Brutal high heel and barefeet trample in the woods

Mistress Catarina trample her slave in the woods. She begin by trampling him under her high heeled sandals, she digs her heels in his body, stand on his ribs cage, crush his face and hands, Mistress Catarina enjoy to trampling slave under high heeled shoes. She then take off her shoes and trample him under her marvelous barefeet. She rubs her sweaty feet on his face over and over and walk on him for her amusement.

Today, I'm once again her mat. She knows that I will endure everything. She brutally tramples my chest with their heels, leaving a deep impression. When she gets bored, she starts jumping on my chest, my throat and my head. I groaned, but she does not pay attention to me. I'm just a worm under her feet. NO MERCY.

Candy, better than ever and in new style, captured a young chicken boy to fulfill her own pleasures and taste a full taste of domination. Trample bouncing and jumping.

57311 - Human Carpet For Dancing And Trampling

You are ready to see the show? My slave and ready to be used as a carpet for my first dance of 2016. My heels are bad, they will have to suffer. But even barefoot I continue to dance and rise above her belly. My carpet human groans, but I ignore it, I do not care, I will not stop trampling.

Our wish comes true. Maggie is nastiest girl as we supposed. She made a mess again. Nina is executor this time and Maggie passes through punishment under Nina's feet and butt. Nina crushes her little belly with her lovely feet.

In this video behind the charachter of Fakir Mask lurks a twenty years old boy - professional fighter - who is able to take hard abs punishment: he is an expert in martial arts, with well trained body and toned abdominal muscles. The ideal opponent for our Karate Kiki, who knows well how to inflict belly pain! The challenge consists in withstanding Karate Kiki's weight for over six minutes. For this extreme abdominal contest Karate Kiki has chosen to show off a pair of beautiful red stockings. After a sudden belly stomp - just to verify the solidity of the fakir's abdomen - the stomach demolition work can start. Karate Kiki tests Fakir Mask's abs in all kind possible - tiptoe standing, walking, trampling - concentrating the weight always and only on the same spot: the belly. This video is really a must watch for abs trampling fans! 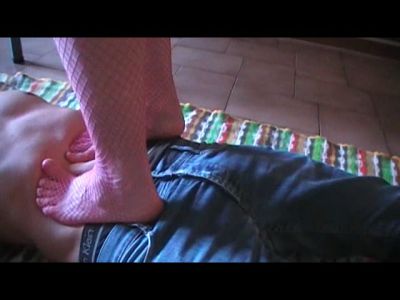 Dorothy showed up totally destroyed after a long night, unfortunately for her, the scheduled scene was her first trampling as a victim. I was hesitant about the whole thing, but Candy insisted to do the scene anyway: a footsmelling carpet doesn't need to feel alright.

This video is the practical demonstration of my theory: it's very easy to find a potential trampler and introduce a girl in the funny world of the Stomach Demolition. There's nothing perverse about it, therefore it's not so difficult to convince a female friend that belly trampling-stomping-jumping... it's cool! A very amused activity indeed :) First of all, I asked Vale - my open-minded friend - to try standing full weight on my belly (an excellent way to test her balance and my stamina too). Then, when Vale became familiar with the easiest trampling exercises - totally aware of how odd and funny is to use a fakir as a human carpet - she began jumping, landing heavily on her knees and bare feet over my sore stomach (the springs of my bed weren't so happy!). Finally Vale experienced the thrill of standing full weight on my face for a few seconds. She remained enthusiastic about this experience. Me too. Let's repeat it soon! 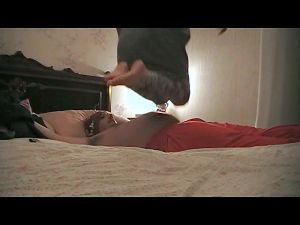 Mistress Maeva trample her slave under her new ballet shoes Repeto. She stomp him hardly, jump on him, stand on his face, stomp his balls, she walk on him like a vulgar doormat.

Lisa is wearing a pair of shoes with big chunky heels she steps on her slaves hands & fingers under the front part of her foot then she uses her heels, you can see his finger actually crushing as she applies all of her weight as his finger goes white under her block heel.

She likes when I groan under her feet. So she wore hessian boots with ribbed soles. She slowly tramples on my chest without mercy. When she thinks that my groan calms down, she starts to trample on my balls and cock. And of course she will not forget about my head.

Dorothy sits on the footboy and orders him to lick her salty soles, while she smokes and uses his obedient mouth as an ashtray. He has to swallow every load, with no exception! When she has finished, she knocks over the other ashtray, and the game begins! She steps into the ashes and makes her soles totally filthy. Now it's the slave's task to lick them clean again, and again! First his tongue, later his whole face gets black. Ashes in this amouth are not just disgusting but extremely painful, too! But this chick showes no compassion, she jumps on him, stands on his face and rams her foot right down his throat, while he has to endure her full weight on his chest. She footgags him with totally dirty feet, keeping him on the very edge of throwing up. And as if he did not had enough, she turns him over and makes him clean the floor, too!

Russian lady Natalia wants to slaughter this loser today. She's wearing wedgies and wants to hurt him with them. The severe Russian lady is standing on his naked upper body part and tramples him strongly. Actually she likes it, so this could become her new hobby. That little asshole hasn't deserved anything better than getting trampled, so Natalia stamps hard on his chest. Her victim groans with pain, but that's right what Natalia wants to see! She calls the shots and tells him in detail what he's ought to do and what not. After she put off her shoes, she steps with both feet on his face so that it gets impossible for him to breathe. He only may hope that she stops it soon.

68641 - The Hot, Mainstream Models Come Out On Halloween Night

This Girl Miss Selena is protecting Her identity because She's a mainstream model and doesn't shoot fetish/adult materialHowever, She loves the idea of owning financial $laves so She gives you Her personal email address, while also making Her slave remove Her heel-boot & shoving Her sweaty foot in this loser's mouth!Then She orders him to clean in between Her toes while She kicks him HARD in the face! She switches from Her Domme session outfit into Her Halloween costume - a pretty ballerina - and tramples 'n dances right on loser's face while giggling.Want this to be you? Want your wallet drained by a classy & snobby Black Girl? Email Her Highness for a real session today, in-person, webcam or custom videos!

Russian lady Natalia wants to slaughter this loser today. She's wearing wedgies and wants to hurt him with them. The severe Russian lady is standing on his naked upper body part and tramples him strongly. Actually she likes it, so this could become her new hobby. That little asshole hasn't deserved anything better than getting trampled, so Natalia stamps hard on his chest. Her victim groans with pain, but that's right what Natalia wants to see! She calls the shots and tells him in detail what he's ought to do and what not. After she put off her shoes, she steps with both feet on his face so that it gets impossible for him to breathe. He only may hope that she stops it soon.