Monday is always the day when we start a diet and when we watch our weight. Melissa is not an exception and this monday the weighing result is really really bad. She weighs herself several times - either with shoes or barefoot - but the result is always the same. The next day, Melissa (almost desperate for the extra pound) decides to weigh herself in a different way, changing the surface upon which she uses the scale: no longer the floor, but the stomach of Fakir Mask. The fakir stoically endures the various attempts made by Melissa, who will get again and again on her human scale. The verdict is still negative: she needs a diet plan! 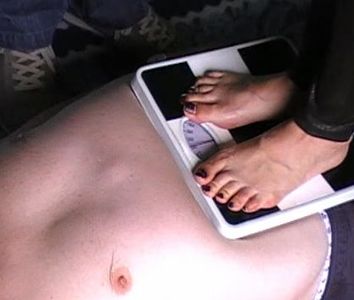 Dominant girls like Emily, Gia and Nicolina can look cute and simple in jeans, but their feet and asses simply can destroy men's pride. Poor guy is under attack of these beauties and helpless beneath them. Three beauties trample him together and jump on his body barefeet on soft bed.

The demolition of the stomach is the house specialty, but occasional exceptions are allowed. It may happen that the actors who perform in the video have other talents (not only abs of steel). Two of my closest friends simply love neck scissor choke and throat trampling. So, in this video, I wanted make them happy by choosing a terrific opponent: Karate Kiki, a young karateka with powerful legs. In the first part of the clip Fakir Mask character is played by a forty-five years old man, who can withstand only two minutes of her throat-demolition work. After this tremendous scissor, Karate Kiki becomes a careful girl and she takes care of her victim, massaging his destroyed throat and his sore body with her stocking feet. In the second part behind the character of Fakir Mask lurks a twenty years old boy - professional fighter - who can take throat punishment in a very great way... to the point that after four breathtaking minutes of neck scissor choke (Karate Kiki is a letal snake and embraces his neck with her legs), he is able to withstand even a full weight throat trampling (soles and toes will sink in his Adam's apple for one whole minute). 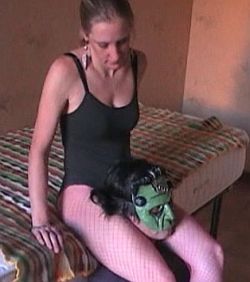 Tonight's PARTY TIME! But first I have to test with what shoes I can best dance. Do you want to watch me dance to my favorite music? And the slave-ignore on the floor? With my sexy high heels? My comfy ballerinas? Or maybe barefoot? ;) It's not that easy. In the heels of my feet do sometime hurt. In the ballet flats my feet were sweating extreme. Barefoot I get dirty feet. Well, no matter for all three problems I have slaves! During the breaks I stand on his head and his stupid face. And if he does not keep quiet he gets from me kicks to the face! In my living dance floor I have left a lasting "impression" :)

This is the first episode of a sitcom in which two lesbians - a couple in the real life - have participated (unfortunately we did not go over this, because the two girls were too busy in several filds). In this clip the lesbian couple meets a new roommate named Norm (alias Fakir Ab), who hopes to be in some way involved in their sexy games. Chiara and Stella, however, have in mind something very different from his desires: something painful and odd. First of all they ask him if he could lay down on the bed. When Norm nods, the skinny girl sits with jeans on his face preventing him from breathing... while the big and fat girl (207,23 lb.) kneels on her stomach and starts kissing her partner. They don't care about the suffering of their new roommate and his shortness of breath: they simply continue to kiss each other. After this house antipasto, the girls stand one after the other on the poor guy's stomach, trampling him mercilessly. Again and again they kiss each other, while the victim begins to gasp for air. 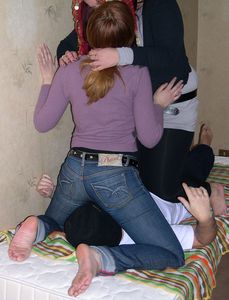 Mistress Penelope orders her husband to lick her dirty flip flop but he is not very co-operative, she thus decides to trample him without pity to teach him the respect.

Now Mistress Michelle is going out of the room and Lady Sophie is alone with the slave. She use the time to kick the slaves hard in his butt. Then she treats him like a pony boy and whipped him. Just as she tramples on him, Mistress Michelle comes back with Lady Tina. Now the slave is whipped and trampled even more.

Erina's really tall even without her high heels on (1,80m / 5'10") and the slave's really intimidated by her height when she approaches him wearing 10cm/4" heels! She steps on his naked chest without second thoughts and the slave moans in pain when the worn out heels hit his skin. She also slams her shoes on his face and threatens to step on his groin too while smiling down on the suffering slave. After a while she gets even more cruel and starts to step on his nipples with the heels to cause him maximum pain before she allows him to take off her shoes while she keeps standing on him. Without shoes it's easier to handle for the slave - at least until she starts stepping on his face and head with both feet and her full weight. He's in serious pain as his tall mistress slowly crushes his head but Erina just laughs at the "funny" face he makes and his moaning. She also makes him smell her sweaty feet in between!

I'm in a playful mood today and want to have some fun with my slave. I put on my rubber boots and order him to lie down next to the kitchen counter - then start trampling him. I start trampling him lightly - then get more and more into it and start jumping on him and standing on his face. After a while I take off the first boot and put it over his nose - rubber boots always make my feet sweat, but without socks the smell is even more intense ;-) Of course he gets to smell the other one as well while I continue to trample him with my bare feet. I put the boots on his nose a few more times and it's really funny how his breathing and moaning makes him sound like Darth Vader through the boots ;-) Then I trample him some more under my bare feet, jump on him numerous times and stand on his face with both feet as well :-) I also included a short video filmed from my point of view so you can see my feet trampling up close :-)

Mistress Nikki is waiting for a few friends to come over - of course all mature ladies like she is. Her slave is going to be their carpet for the afternoon. She starts sitting on the couch, puncturing his body with her high heeled boots. To test his strength and stability she later stands up and tramples him with her boots and later on with her bare feet.

Now some face-box torturing for my poor footslave! I wore my clear/red high-heelssandals to trample all over his face, sometimesfull-weight! He had to lick my dirty soles and heels! Also some chest trampling with thoseheels and nipple-torture ;-) 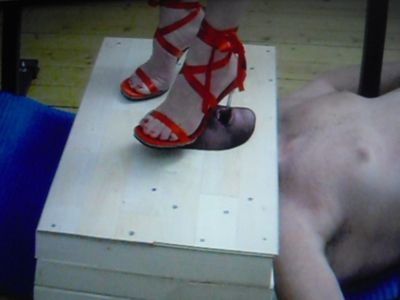 Four chatty and cheerful girls in catsuits Teodora, Sibilla, Kourtney and JJ have fun over a guy. They have a soft bed and professor who will fulfil all their needs. Through their veins flows sadistic bloood and nobody can stop them. His pride has striked by four pair of barefeet.

Footslave is lying under the cock-box.His genitals were bound. So, there is no escape for him. I wore my black velvet high-heels sandals. I trampled all over his helplesscock and balls. Also some kicks to his groin andsome body painting, with those sharp heels. He had not only to bear my heels, as also sometimes my full-weight ;-) 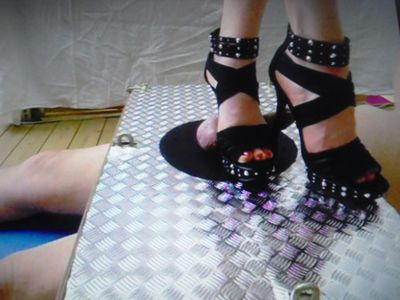 In this clip instead the surprise is Veronica. That day, knowing well all that in months and months of prayers I begged her to do, she brought with her a pair of heeled shoes to try to inflict pain on a slave, and crush him under her feet. Beginning with hands and then move to the back, crushing, inflicting pain also at the suggestion of her friend (the coldness of this girl puts a little fear). Towards the end of the clip Veronica spits the slave giving him a little taste.

Mysteria stands on Eric's chest and then tramples his throat and face. She squashes his face with her strong feet and makes him kiss her toes and feet.

It's nice when you connect a pair of superb subjects. Sibilla and Angel for the first time together, with dirty professor. Plenty of feet, asses and female domination. These two girls rule the world. His face is flattened under Sibilla's weight and feet.

After a few days in the forest waiting for the slave still tied to its mistress. Useful has not made it in time and is punished with trampling in high heels!

By a beautiful sunday, Mistress Lydie orders at her house slave to lick clean her high heeled shoes because they are dirty, Mistress Lydie was in discotheque saturday night and she dont like to have dirty shoes, she then make him lick her fabulous dirty feet while she read a people magazine.

The female student is standing on the body of the slave and trample him. After that she is sitting on his face and is pinching his nipples. Then he gets whipped and he has to lick the foot of the student too. Both Ladies using the slave just for fun.

Last night was some accident in the bar. Emily and Sibilla has some fight with local girl Alexandra. They fight about some boy from Sibilla's side and the biatch has throw the drink in their faces, and runaway. Next morning, after few hours, Sibilla and Emily find her adress and throw into her apartment. And she was really scared. Revenge with their full weight. They stand on her throat with their bare feet and choke her beneath them.