Lady Absinthia wants you under her feet and boots. You wants to kick your face, she will kick you, shoe will trample you, she will crush you under her dangerous gothic boots!

Our second friend repeats the whole thing. He is probably smaller than his predecessor because one girl cannot fit on top of him, although on the second try she manages to do it. Then a short inspection of the plank and another guy gets trampled by all 12 girls. Time: 10.05 min.

Three girls in high-heeled shoes trample over a guy. One of the girls is wearing thongs with a wide heel and the other two are wearing very thin high-heels. The girls try to stand in such a way that they can fit on him from his waist up. TheyÂre all wearing black stockings and sexy shoes, although they leave visible marks on his bodyÂ Time 8.13 min. Remastered - movie from 2006

As the action happens very quickly, the movie is recorded with three cameras in order not to lose any cool shots. The girls are supposed to get on top of him in pairs; one on his belly, while the other is supposed to step on his hands. While getting down from the belly, she stands on his hands and the next one gets on.There are 12 of them in total and this series is repeated twice. Time: 20.06 min.

Pretty Miss Anina uses her slave as a living rug. She tramples on him with her dangerous high heels and with her bare feet. She puts her weight on his head and lets him suffer. After the high heels, her bare feet are his reward.

Three men are lying besides the wall. One of the girls is wearing sports shoes, the other a pair of heavy Doc Martens. The girls trample over all three men, sometimes standing on their heads. They change places without getting off them.

Three girls position themselves in such a way that they can all fit on top of the head of the guy lying on the floor. It's not easy to fit six feet on one head. After a while, five feet manage to fit on him. Then the girls move across his belly, chest and head. The second part of the film shows 10 girls standing in a single file line on top of DonKichote. Then the girls get off him, stepping across his head on the way down. 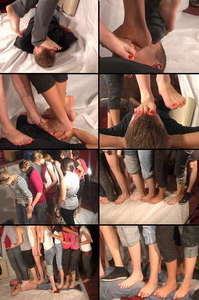 The next Polish city that I visited was Katowice. It was a BDSM party, but I chose to do my thing and was warmly welcomed as something unique in this area. Only one person had done trampling before, the rest really wanted to try it. 52 girls trampled me in this video. One girl liked it so much that she didnÂt want to get off for three minutes and was sticking her heels into me. There is also a scene where a girl sat on top of me, thinking that I was some king of material and she was having a drink, when other girls took her off me. The film was shot with two cameras. One was placed behind my head, the other was under the stairs. Time: 22.49 min.

A man is lying on the bench. A girl in tall boots is walking over him. He kisses her boots. Then another girl in black high-heels enters. She steps on him hesitantly because it?s her first time and the bench is pretty narrow. The girls change places. They walk over him and make him lick their shoes. Next, the man lies down on the floor as one of the girls sits on a chair and makes him kiss her shoes and then her feet. The girls switch places after a while. Time 12.11 min. Remastered - movie from 2005

Girlfriends Mia & Luisa love to dominate a guy under their feet and to take pictures of it. They dominate him with trampling and face crushing under socks and bare feet.

This film was shot with two cameras and edited in such a way that after seeing people walking on the carpet, which was shot with a camera placed horizontally, there is an overhead shot looking downwards. Only the shots with girls walking on the carpet are included. In the film there are no scenes where nothing is happening. The faces of the girls walking on the carpet are not shown. The carpet is crossed a total of 69 times. There are also longer scenes, like two girls posing for a photograph and a girl in ballet shoes who was talked into standing on the carpet by a friend and she walks on it for over a minute. There is also a very long scene with a girl who is standing on a man for the first time and she couldn't believe that someone could stand lying under her incredible body weight of 55 kg. The human carpet claimed that he didn't feel anything and she wanted to bet that she'd do anything for him to say that he's finally had enough. She jumped on him with all her might. Did he finally say stop in the end?

Mistress Jana wants to see her slave suffer today. She wants to trample his hands and put her boots - especially her heels - on his hands. She steps on them hard and grinds the heels into his hands. The slave has to endure the pain for his mistress - he has no other chance!

Get now the complete Version of Lady Samanthas Trampling POV Video #4 . She calls you a little worm and she wants to trample you under her High Heels and under her bare smelly Feet

Four guys lie by a wall. Two girls are stepping all over them. One girl is wearing beutiful shoes with a thin heel and a strap on her ankle. You can see marks from the shoes on the mens? bodies. The men are slowly getting tired of being trampled over. Only the two toughest guys remain. One of the guys begs the girls to leave visible marks on his body. Even though the girl jumps on his stomach in high-heels, she doesn't manage to leave big marks....

Two girls have a wonderful time. They are wearing sandals with flat soles. They are dancing on top of a guy and keep coming up with new ways to stomp on him, jump on him, and walk on his head. Then they take off their shoes and keep having more fun. They jump from his knees onto his balls. When the guy has finally had enough, one of the girls starts to trample the other one. Time: 13.16 min. REMASTERED - movie from 2003

A totally amateur film. My truck driver friend stops on the side of the road next to some hookers and asks them to step all over him. Check out what they say as they do this for the first time. The film is in Polish, but the best parts are translated and the film has subtitles. It is filmed with a handheld camera so the image is shaky at times. The driver deserves credit for being able to focus the lens on himself while he is trampling.>>>>>>>>>> The first girl - She's doing this for the first time. She says she heard about him from a friend and knows what it's about. She is wearing black shoes with red straps and heavily worn heels. She does everything she is told without worrying if she'll hurt him. She's not very good at this and it's hard for herto balance on him. She holds a tree for support and starts to walk a bit better. She really digs her heels deep into him. He asks her to stand on him in such a way that he won't be able to take it anymore. He tells her to leave marks on him. In the end he asks her to take off her shoes. She is wearing pink socks. Now she's feeling a little more comfortable walking on him. She stands with both feet on his face, and puts one leg on his neck. >>>>>>>>>> The second girl - She is wearing pretty black sandals with sequined straps on platforms and thin heels. The girl has no problem with stepping on him. She asks all the time if she's walking on him correctly and eagerly stands where she is asked to. She says she weighs 58 kilos (127 pounds). She sounds happy. The only thing that bothers them both is the sound of the mosquitoes.

We decided to use other peoples' ideas this time. We showed the girls some random trample films from the internet. They had to perform the stuff in the films on us. In the first film, the girl jumps on my stomach only in stockings, but she couldn't take my moaning and she gave up. In the second one, the guy is lying on the sofa and she is supposed to step on him, wipe her shoes, and stamp on him in heels. The third one is two girls standing in line, one is wearing high-heels, the other sandals with heels. The first one stands on his face while the other one sticks her heel into his stomach. The fourth one shows two girls in stockings taking turns stepping on a man, then they both stand on him at once. The fifth one has a man whose hands are tied to a chair. The girl sits on the chair while another one digs her heels into his stomach, then she wipes her shoes on him and the girls switch places. The last one features head trampling. Three girls are supposed to stand on the guy's head and lift their other leg up. They repeat this three times.

Miss Serene takes on her silver sneakers and tramples her new human floor under them. She loves to jump and walks on him with the music and she wants to tease him under her feet. She loves to stand on his face with her full weight and she wants to hear hi suffer under her weight! Why a sweet blonde mistress. Miss Serena removes her sneakers and starts a trampling and jumping session on her new human floor. She loves to kick him and to stand full weight on his face. She crushes his nose under her sweet bare soles ...

Aga tramples me while on a swing. She jumps on me and swings while standing on top of me. Then she sits down and another girl joins in. They both start swinging. Time: 6.08 min. REMASTERED - movie from 2003