Sweetbaby and Jordan Star(alias Miss Medina)find the lazy maintenance man. The ladies are angry since a while, because the corridor is too dirty all the time. Now the maintenance man must suffer and clean all the way with his tongue. He is trampled and jumped on and the ladies also let him smell their dirty socks.

Mistress Leelo trample her slave under her wedge heeled sandals, she stomp him, jump on him hardly, crush his face, choke him, make him lick her dirty soles, she then take off her shoes to trample his face under her divine barefeet.

The two girls beat the slaves with the cane. Also nipples are tortured and let the slaves do not stand still. He writhes and moans. The find both good and move on. Miss Betty spits the slaves from time to time in its face and makes degrading comments. Mistress Michelle uses his stomach as punching bag. Then both trample the slave and give him kicks and punches. The slave is totally submissive and now licking the boots of Mistress Michelle even faster.

Our stupid pluber Andrea is back. He arrives to Lilli's and Ale's home asking for explanations, because the bank did not want to pay him the check, that Lilli gave him. Andrea worked badly so Lilli purposely paid him with a check, that Andrea could not cash in. Unfortunately for Andrea, Lilli is with Samanta and her maid Chiara. The girls throw themselves against Andrea to punish him for his arrogance, because he asked for money for the bad job he done. So our poor Andrea is going to suffer Trampling, Stomach Sitting, FaceStanding, Humiliation and Foot Worship. In addition to this, it seems that Samanta feels a sadistic pleasure sticking her heels in the nipples of Andrea.

Casual clothes and most dominant girls. Sounds strange but it works. The girls feel like at home and their bodies feel free to move. Their wepon are high heels and their target is one fat guy. Emily, Gia, Kourtney and Teodora. The t0rture can start. His crotch is under attack of their bare feet. They trample his pride with all their weight.

Karate Kiki, our lethal martial arts champion, leaves aside her usual kimono and she wears for this time a sexier dress, enhanced by a pair of black stockings that will mean, at the same time, the fortune and the misfortune of Fakir Mask. Fortune because the fakir loves that kind of stockings and it will be a pleasure for him to admire and inhale the pungent scent. Misfortune 'cause even with sensual black stockings Karate Kiki will not lose the habit of inflicting pain. First of all she tramples Fakir Mask's body with elegant sadism, then she enjoys herself with a painful throat-demolition work. After one whole minute of insane leg scissor torture, she decides to indulge in a moment of pure relax. She sits on the couch with a good book in hand and a pain-resistant fakir under her feet (only the strong personality of Kiki could transform a street artist in a human foot stool!). In one way or another Fakir Mask will remain for the entire duration of the clip permanently under Karate Kiki's feet. 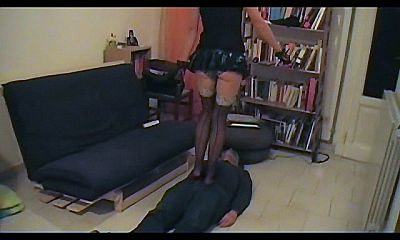 One guy from Germany comes to us with intention to try our girls. He has much experience in fetish on some other sites and especially in high heels trampling. He believed that he will tire our girls. I warned him about our girls who are hungry for someone special, who can endure all their energy and their positive but nasty vibrations. And he was good. But the girls didn't use their full strength. There is no man on this planet who can resist under Alice, Emily, Julie, Gia, Sibilla, Teodora, Kourtney and Nicolina. Anyway, great serial of twenty videos made in two days. Alice, Teodora, Sibilla and Nicolina trample him in colored pantyhose.

People who follow us with affection and attention know exactly how Karate Kiki is not only a great karateka, but also an excellent dancer. In this video she shows her skills, dancing barefeet on Fakir Mask's belly for six consecutive minutes. A sexy trampling performance indeed! 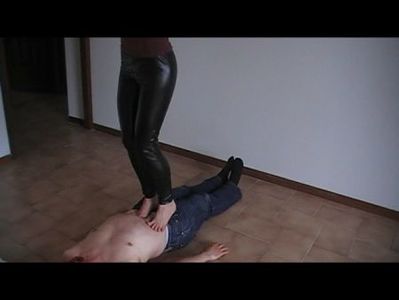 Mistress Penelope's husband has to lick her dirty flip flop but he is not very co-operative, she thus decides to trample him without pity to teach him the respect.

This video is really a must watch for any one who is interested in stomach demolition and belly punishment. It's a painful challenge between Fakir Ab and his friend Fakir Mask. The rules are simple. The two iron fakirs give carte blanche to Melissa: she can do all she wants, having the abdominal area as a target. They lie down belly up (Fakir Ab on the right, near the camera; Fakir Mask on the left) and urge the sadistic Melissa to spill their guts in every way imaginable: by kicking, stomping, trampling, jumping from the bed, consecutive jumps on the stomach, butt drops ... with no limits and no pauses. This cruel game ends when one of the players raises his arms to implore a stop to the shooting (and to the beating). It will take no less than thirteen minutes of belly massacre to determine the winner. An extreme challenge with two opponents simply in love with belly pain. (Warning. If you experience slow download speeds, the reason is the highest quality of this video). 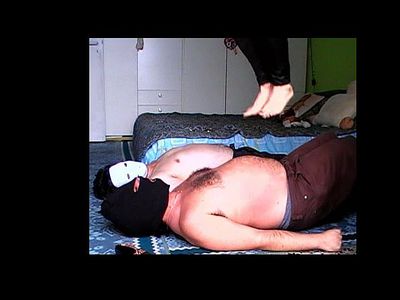 This guy is conditioned by beautiful Sibilla. He tries to flirt with her but she is so disinterested. She can have any guy she wants but it's hard to find the guy who can be pounded into submission, So, she uses her charm to said every wish she wants to him and he must obey her requests. She just says "maybe"... Facetrampling

Heavy Lajwanti is a very young belly dancer - she is barely 19 years old - characterized by a great passion for oriental dances. Her physical structure is really impressive (height: 5ft 8.50, weight: 194 lb) and her chubby sexy belly is perfect for a belly dance performance. In this stunning performance, the beatiful Heavy Lajwanti stands on Fakir's abs (one foot on the lower abs, the other one on his stomach/solar plexus) and dances to a nice egyptian belly dance music for over five minutes, orders the fakir to bear her enormous weight. Can Fakir Ab - the fakir with abs of steel - withstand this prolonged torture for the whole time of the egyptian song? 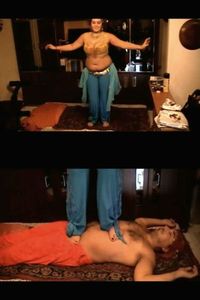 My dear friend Dimitri has always followed with great envy my performance of abdominal strength and body conditioning. So, when a particularly beautiful model (133 lb) went on the set for a Stomach Demolition video, he volunteered his belly as a carpet, betting against us that he was able to withstand the heels of her new shoes for five consecutive minutes... obviously he lost the bet! Dimitri withstood the weight of the model concentrated on the heels only three minutes, with even three breaks! Each minute he begged her - with evident embarrassment - to stop hurting him. Yes, heels are terrible for those who have no stamina and no experience. 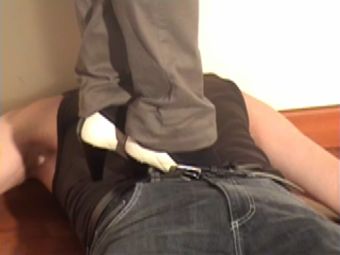 This is the second episode of a sitcom in which two lesbians - a couple in the real life - have participated for amusement (unfortunately we did not go over the first two episodes, because the two girls were too busy in several filds. You can easily find the first one - entitled Suffering under Two Lesbian - a little more back in the same clipstore). In this odd video I show my new home to a dear friend (who is - as you might guess - Fakir Mask). My two lesbians roommates come into the house, while I was in the adjoining room to answer the phone, and when they find an intruder in home (oops, I forgot to apprise them!) inevitably it's time for a cruel beating. Fakir Mask is belly kicked, trampled, and stomped with no mercy. The girls trample togheter the poor man, and they kiss each other, while the victim begins to gasp for air (one of the girls is 207,23 lb.). The video stops suddenly because Fakir Mask receives a tremendous belly stomp with relaxed stomach - body blows are lethal if you are unprepared to take them! - to the point that all his breath comes out as a groan. You will see the girl genuinely concerned about him, so we turned off the camera. Don't worry: after a few seconds, Fakir Mask has returned to breathe normally. More or less. 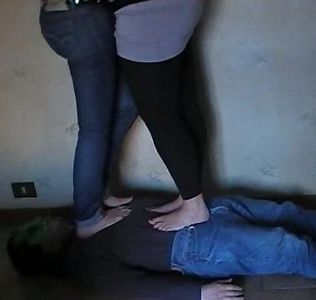