Everybody dreams about soft and smelly girls' feet in socks and sneakers. After training, our two girls Teodora and Sibilla come in the professor's apartment just to make fun with him. Combination of great nature feet aroma, sweaty ass and sweaty body in sneakers makes me mad. I hope so you. Facestanding with great aroma of girls' feet.

She's back, better then ever. Eager for domination over the men pigs, Sibilla meets again dirty professor and t0rtures him on her unique way. She mistreat him with glow in the eyes and I'm glad that beautiful girl is back. He doesn't know where is he. Sibilla tramples his stomach, crouch, chest, throat and head.

Mysteria likes her morning exercise. Today she does her "aerobics" with the help of Eric. She jumps up and down on his body, from the bed, tramples him in black ballerina shoes and bare foot.

It's Hailey's 19th birthday! She's going to read out to you guys her birthday demands all while standing on Walter's neck and head! She expects all of us to follow them without question! Memorize these demands because they will become your new 10 commandments! To name a few:

4) Everyone of you pathetic losers MUST buy this clip or else!

At the end of the clip she even JUMPS on Walter's head while giggling! M E A N!

PRODUCED AND DIRECTED BY HAILEY, ON HER BIRTHDAY! SHE CAUSED A TREMENDOUS AMOUNT OF TROUBLE, PAIN, AND SUFFERING! HOWEVER, FOR HAILEY TO VISIT US ON HER BIRTHDAY AND PRODUCE HER OWN CLIP FOR EVERYONE TO ENJOY, IT WAS EXTREMELY SWEET AND KIND OF HER! THANK YOU HAILEY, FROM MYSELF, OUR GORGEOUS TEAM OF GIRLS, AND YOUR LEGIONS OF DORKS FROM AROUND THE WORLD, HAPPY BIRTHDAY! <3 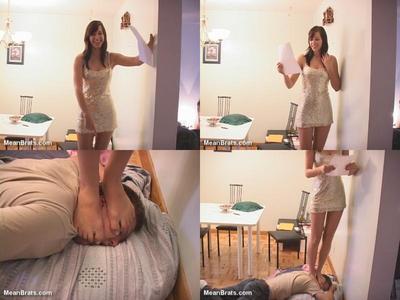 Deborah is a go-go dancer. She likes her hobby. She dances whatever she does. Her body is her world and guy called Perica is her dance floor. Dance lovers, enjoy in the movements of pretty Deborah. She crushes his head.

Joss and Meg are hungry. They would like to eat pancakes. One sweet boy is here to be squashed by them and turned in mancake. Cute and crushed, he is ready to be eaten. Preparing of mancake. Trampling and crushing.

Mistress Tortures her slave with brand new High Heel Black Sandals. They have a brand new heel tips and they are very thin and high and they make her slave suffer a lot!!!! She digs her heels deep in to his gust she stands full weight with her heels in the belly button and digs it deeper and deeper by bouncing up and down. She stands on his chest and starts to bounce, You can see how the rib cage is moving up and down and how heels digs in right between the ribs!!. She then does the same on his groin digging her heels with no mercy in to his balls and cock!! Very hard trample!!! This is the first ever Eves trample that slave asked to stop!!! ;-) You can see how the heel marks appears on the slaves body after every step of the GODES EVE......

Natalia injures her slave today. He's lying on the floor, undressed from the waist up and is controlled by his mistress with a leash and a dog collar. Mistress Natalia wants to see her slave suffer. Therefor she stands on her slave's weak chest with her sharp heels and pressing her high heeled sandals into his flesh. Her slave seems to have a glimmer of hope when she gets off before she sits down on him to put off her shoes. But then she climps his chest again to continue trampling on him. She even stands on his face barefeet and keeps on trampling. To cause her slave pain, she even doesn't refrain from doing some little jumps on him.

The slave has been waiting with impatience. Without further ado, she faces her slaves with her nylon stockinged legs. With her whole body weight, she stands on his face and tramples around. Many nasties, the slave has to endure under suit. After the slave is completely exhausted, the mistress leaves him.

Skinny guy is a dad and Deborah is his spoiled daughter. He bought her teddy bears but she wants many more like a new car and a good things for her. Dad can't understand that his little girl has grown up. His little girl wants to play sadistic games with her dad. Dad like dad must do everything for his daughter. She uses him as a stepper. She runs on his upper body.

Faye's back and this time she's wearing blue ankle boots matching her blue dress perfectly. She steps on the slave's chest and keeps her balance by leaning against the wall at first - but soon she gets more comfortable with standing on a human body on thin heels! She walks all over his chest, stomach, crotch and legs in her high heel boots and enjoys the pain she inflicts on her human doormat! Then she takes off her boots and continues to trample the slave under her sweaty bare feet. She definitely loves to stand on his head with both feet (and her full weight) and to jump on his body. She also stands on her tip-toes on his stomach a few times to apply maximum pressure. After some more jumping and headstanding she finally leaves him alone!

Mistress Leelo trample her slave under her new high heeled shoes, she like to digs her heels in his body, jumping on him, stomping him hardly and standing on his throat, she crush his hand and face and make him clean her soles with his tongue.

66821 - Trample and smelling domination for the new Mistress Tracy

Mistress tracy trample a slave for the first time, she trample him under her sneakers, jump on him. She then take off her shoes to making him smell her shoes, socks and feet and trample him again under her very pretty barefeet.

Lisa looks gorgeous in her latest trampling clip as well. She's wearing a white blouse, black leggings and matching steel heel shoes! The slave's chest is already pretty bruised from the last few clips that were filmed and he literally starts screaming in pain immediately when she steps on his chest - but of course Lisa isn't really concerned about his well being and enjoys hurting him under her sexy shoes. She tells him to stop whining and how he should feel honored to be allowed to serve her as a human carpet while the metal heels of her shoes leave new marks with every step. Finally she shows some mercy and allows her slave to take off her shoes - only to continue trampling him under her bare feet immediately. Her feet are pretty sweaty but she does some face and headstanding never the less. The slave gets to smell her pretty feet during the trampling as well before she finishes him off by jumping on his chest!