Mitress Kitty trample her slave under her new wedge heeled shoes, she stomp him hardly, crush his face and throat, trample his balls and make him lick her dirty soles, she then take off her shoes and trample him under her stocking feet. She jump on him, stand on his face and throat and gagg his mouth with her marvelous feet.

Dirty pervert waits behind a stage to see who is a new girl. Joss comes with her and he fells from his chair. Dramatic moment. Her name is Misty, about 170cm and 58kg. Trampling hell.

Poor Meg is at home alone. Her friends are all on the trip. But, we got surprise for her. The slave as a gift. She is really happy, the best present ever. She is full of negative energies and this is her salvation. Throat choking and standing.

Instead to go on the training, Teodora and Deborah decide to use skinny guy as exercise machine. Small room, the girls in great conditions, air full of lovely girls' sweat and space full of female domination. Bouncing on his balls.

Mistress Maeva tramples her slave under her very old flip flop, she crushes his face, his balls, his hands and his throat and forces him has to lick the disgusting soles of its shoes.

Liliana tramples Alex in her black knee socks. She likes to stand on the slave only on one foot or on tiptoes, causing him alot of pain. She also jumps on Alex. Sometimes Liliana gives poor slave a rest, but not for long. She also gives a slave to smell her sweaty knee socks.

Sarah steps all over Mark's head in her cruel hard boots, she has a glass of wine & drinks it whilst her slave suffers under her, she does not care how she steps on him she just tramples all over his head, watch him suffer & squirm under a girl who just does not care what damage or pain she causes him.

I've put my slave's head in the smother box - but he's not getting smothered today! I step on the box wearing my sexy high heels and start trampling his trapped face underneath their soles. Unfortunately balancing on the box and his face in heels is a real pain in the ass so I had to take them off after a while and continue the face trampling with my bare feet. His face looks damn funny getting distorted under the pressure!

Princess McKenzie has been at work all day and when she came back home she found out that her slave didn't clean the house properly. So that means he will be punished. Princess McKenzie is looking so hot today wearing black skirt and black jacket. She came straight from the office actually. You know you don't mess with Princess McKenzie otherwise you will suffer. And that's exactly what happens to the slave. He will be trampled. He is not cleaning her house he will clean her dirty soles then. Of course the trampling is full weight as always. She is wearing a sandal wedges this time by the way.

Our studio rug gets trampled under Melanie's shoes till his skin turn's pink! We had a good laugh at the end when he called it quits but she continued walking around on him! Cute girl! We'll have to schedule another shoot with her soon!(clip language: french) 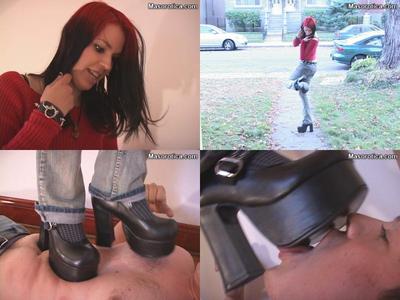 When the tall gorgeous girl in batman costume comes to you, eager for domination, what would you do? Of course, let it be and enjoy under her. Head massacre under full weight.

Posted on: 2013/11/07
Keywords: Trampling, Trampling Clips, DuneFeet, eager for domination, what would you do? Of course

Sindy really loves hurting men - especially using her brand new high heels. She steps on the slaves naked chest right away and makes him scream in pain by digging the sharp heels of her shoes into his skin. You get a good view of the tattoos on her feet as she marches over the slave. She even puts a shoe on his face and slowly increases the weight to see him suffer more and more. After a while she takes off her beloved shoes and continues to trample him under her bare feet. Now that she can walk even more easily on him she tries out how to hurt him the most. She puts her full weight on her toes, jumps on him, grinds her heels into his belly and chokes him with her feet. This girl knows how to make a trampling painful and exhausting!

Susan looks really classy in her short white dress and matching beige high heels - and she's going to give the slave a classy trampling session. She uses the fireplace to balance while the heels of her shoes dig deep into his chest and stomach. Despite the slave's moaning she moves on him carelessly and even shoves her shoes into his face before she takes them off - while she is still standing on him of course. Now she can move on him even better - and by move she means jump, bounce and stomp! She even steps on his head and face with both feet - and her full weight - a few times before she lets go of him - for now!

Mistress Natalia comes to the hotel after jog. Lazy slave is lying on the floor and dreaming. She tramples her human carpet with her full weight (70kg / 154lbs). First she tramples Alex in her dirty street sneakers. Then she stomps Alex in black socks. Her socks are very sweaty and stinky after morning jog, so she put her feet on the slave's face and now he can smell this divine and strong aroma. But then Mistress Natalia thinks that it isn't enough for Alex and put her stinky socks inside slave's mouth and press it with her feet. She also put her very sweaty and stinky barefoot on the Alex's face and gives him chance to smell her strong aroma from feet.

Mistress Lydie tramples her slave under her old and disgusting flip flop, she jumps on him, crushes his face and his balls, orders him to lick clean the soles and the insole of her flip flop and her disgusting and very stinky feet.

Liliana tramples Alex barefoot with her full weight (70kg / 154lbs). She stands on him on both feet, on one foot, and on tiptoes. She also jumps on the slave. Liliana stomps Alex's belly and chest. Liliana also likes to torture her slave when she is standing on his belly only on one foot and on tiptoes at the same time.

Exotic Adrianna since she discovers the domination, she just cannot have enough! She thinks all the time ways to have fun with her slaves and when she gets home with a slave, she is enthusiastic to play with him, degrade him, dominate him and humiliate him! Adrianna's slave must do his best to work his way down!Bratty Adrianna wears her sexy high heel sandals and she stands on the slave, starting to trample him. She steps on him without any care, the heels of the shoes are digging his flesh and he moans in pain! Adrianna takes pleasure from this of course and she makes him lick the soles clean as she stands on him. She tramples her slave's dick hard under her shoes and she kicks and stomps him as she stands on him!!! For the last 2,5 minutes of the clip, she goes off him and stands over his face, starting to crush and stomp it under her high heels!!!

Erina's really tall even without her high heels on (1,80m / 5'10") and the slave's really intimidated by her height when she approaches him wearing 10cm/4" heels! She steps on his naked chest without second thoughts and the slave moans in pain when the worn out heels hit his skin. She also slams her shoes on his face and threatens to step on his groin too while smiling down on the suffering slave. After a while she gets even more cruel and starts to step on his nipples with the heels to cause him maximum pain before she allows him to take off her shoes while she keeps standing on him. Without shoes it's easier to handle for the slave - at least until she starts stepping on his face and head with both feet and her full weight. He's in serious pain as his tall mistress slowly crushes his head but Erina just laughs at the "funny" face he makes and his moaning. She also makes him smell her sweaty feet in between!