One more soldier has join the army of DuneFeet. Professor is not here anymore and we have inspire the slaves in our country to join us. Next slave has called on audition for slave by Teodora and Angel. They will t0rture poor guy to find out is he good enough for us and can he endure all the hell made by our girls. He's good... Teodora tramples him in high heels.

This is a story about three sis. Alex and Modesty and their step sis Maggie. Maggie is youngest and she is always abused by her older step sis. She is obedient and she does everything her pervert step sis demand. Unlike the fairy tale, poor Maggie doesn't turn into a princess and she stays their servant forever. Her step sis visits her every day in her crappy room and torture her. Little Maggie is sick and she coughs. sis trample her to the limits.

Mistress Natalia doesn't really care about the man lying next to her sexy glitter high heels - she just wants to have some fun hurting him! She steps on his chest and slowly walks on him - and forbids him to talk or moan - she doesn't want to be interrupted. The slave tries to keep quite but sometimes moans from the pain Natalia's sharp heels cause him - especially when she's standing on one foot only! After a while she gets off and slips out of her high heels - of course only to continue trampling him under her bare feet only seconds later. Now she can more easily walk on him and even put her sweaty feet on his face to keep him quite and make him sniff her sexy feet. 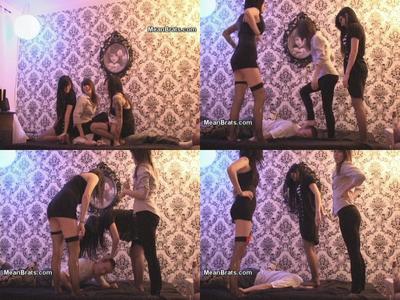 I am checking out my three new shoes on Pete. Because they are new, the heels are really sharp, which you can see by the marks they left on Petes body.I am starting with the low ones: black pumps wich are perfect for the office.Then i am taking a little higher ones which might be also good for party.At the end i am taking the highest ones, which are definitely for party.

Mistress Cassi trample her slave under her new sneakers and make him lick them clean while she smoke cigarets, she then take off her shoes and ordered the slave to smell her sneakers and sweaty socks while she use his mouth like a ashtray.

I'm just chilling and reading in the living room when my slave approaches me and wants to give me this ugly bouquet of flowers - couldn't he choose pretty flowers for his mistress?! I strike the bouquet out of his hands and onto the floor - and when he tries to protect it with his hands I just step on it! The bouquet and his hands are crushed mercilessly under my rubber boots with heels! Let's see if he'll get me prettier flowers next time :-)

What girls do after high school class? They want an extra fun. After sveral hours on class in high heels, they need a rest for their tired feet in stockings. Emily and Teodora make the party on the balcony with one guy. Trample in black stockings.

Lady Chanel and I show Miss Amy how to properly trample a slave. We walk all over him and dig our heels into his nipples. That's a real hard nipple torture! Lady Chanel jumps on his slave body again and again in high heels - and her heels go deep into his chest. We'll see what the slave can take when all 3 of us take care of him!

Crazy professor wants to be an actor. We heard about it and we have call two girls to get it out of his head. Emily and Teodora find interesting method for him. Trample lesson.

Mistress Kitty and Frank finally arrives. Mistress Kitty begins his sport with stretching ... And what better way to use his slave to it? For a time he used to something ... Anything goes: Trampling, throttle, step, crushing the testicles, kicked in the stomach etc ... It will then wait quietly tied to a tree back to his Mistress ...

Lady Samantha lets him kiss her white knee-high boots before she starts to smother him under her bare sweaty feet ! She presses both soles hard on his face, noise and mouth and she loves to control his breathing with the full power of her body !

Mistress Lea tramples a new flunkey, she is very cruel and without pity, she jumps on him,crush his balls, his face, stomp and kick him in the belly until the slave beseeches his pity.

Cute French girl Danielle verbally abuses an ugly English boy beneath her feet. Trampling him and wiping her feet across his putrid face and dirt-tongue, makes him clean the grime off the soles off her moccasin shoes that she just wore after an entire day shopping at the mall with his money! A harsh end for an ugly English boy, but the only way for him to get close to a cute French girl like her! 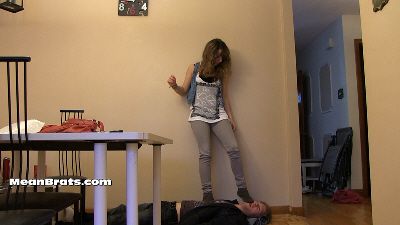